Letter from David and Martha Montgomery 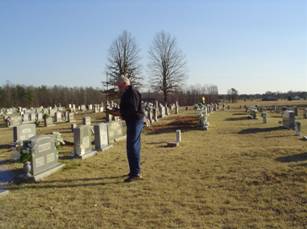 In the year of two thousand, the first year of the new century, I (David) became interested in surveying the cemetery where my grandfather & grandmother as well as my great grandfather and great grandmother on my father’s side were buried. I noticed pages on the world wide web where people were doing that, so I did that one and sent it in to a website. After several months passed, I became interested in doing more. I did a cemetery where we once attended church. After that I suppose I was hooked.

From the first one until the present time has been about twelve years of actively surveying or enumerating as it is also referred to. I work as a volunteer.  I have been out in the winter when my hands got so cold, I could hardly hold a pencil or pen. I’ve also been out in the hot time of the year when it was so hot that if one didn’t wear a cap or hat, a severe sunburn would be the result.

About nine years ago, my wife Martha started helping me, mostly on the large cemeteries. Now, she enjoys it as much as I do. Some folks frown when I mention that I/we survey cemeteries to be placed on the internet. I always tell them that we enjoy the fruits and rewards of helping folks far and wide to acquire dates and the burial place of their ancestors.

We strive very, very much to be accurate with our work, however, human beings make mistakes and sometimes we do that. Most folks are kind and email us expressing their gratitude for the work we do. A few months ago, I received email inquiring about the location of a cemetery. We have never been to the cemetery so I started working with topographical maps on the internet, found the GPS coordinates, looked at other road maps, etc., and gave the people directions to get there. I received an email later telling me that they were successful in finding the cemetery and were appreciative of my work in helping them locate it. That, friends, are when the rewards flow in.

On the pages of this site, it is my hope that someone will find the information that they need. More pages will be added as we enumerate more cemeteries in the future.

Important Announcement from David on his Health

Being the bass guitarist at our church, having played bass guitar for over 42 years, I have never had a problem keeping up with the tempo.

About 3 or 4 years ago, I noticed I was having difficulty keeping up on the faster songs.  Shortly after that I noticed difficulty in sliding my hand quickly on the neck.  Due to a previous work related injury, I was facing rotator cuff surgery on my left shoulder.  When in therapy for my shoulder, the therapist asked me to shrug my shoulders of which I could not do.  I had an appointment with a neurologist in who diagnosed me with Parkinson’s Disease in 2015.

I was continuously falling due to balance issues, always falling on my left side, and I was still having a problem with my left arm being stiff, being unable to use my left arm or hand. I was referred to a movement specialist at Vanderbilt in .  After numerous tests and scans, in August of 2016, I was diagnosed with Corticobasal Degeneration or CBD for short.  As the disease progressed, my left leg and foot stiffened making it very difficult to walk.  I am using a wheelchair now.  Swallowing difficulties can arise also.  I am presently having speaking problems also.  If it moves to my right side as the neurologist said it would, I’ll be totally incapacitated.

There present is no cure or treatment for CBD.  Treating the balance issue with Carbidopa/Levodopa is all the medication presently available for CBD.

Important health update:  David Montgomery went to be with the Lord on March 14, 2018. He will really be missed by many people.

Prayers are welcome for the family.

To learn more about David’s illness, Corticobasal Degeneration, click on the links below